Pure fresh goat milk GMILK from GMILK farm is fresh daily. Fresh Goat milk is a much healthier alternative, especially when it is raw and organic.

The Benefits of Goat Milk

Goat’s milk offers a wide variety of health benefits, with very few of the negative side effects of drinking regular cow milk.

Some research suggests that one of the main benefits of goat milk is that it may benefit inflammation. Another reason why it is easier for people with bowel inflammation to drink goat’s milk, instead of cow’s milk.

Goats requires far less space and food than cows. Typically, you can comfortably raise six goats on the same acreage as two cows.

Studies done at the USDA and Prairie View A&M University, link goat’s milk to an increased ability to metabolize iron and copper, especially amongst individuals with digestion and absorption limitations. Besides drinking goat’s milk, you can also take a digestive enzymes supplement to help with this also.

Another main health benefit of goat milk, is that it is closer to human mother’s milk than cow’s milk is. Because it has a chemical make up that is much closer to human milk, it is easier to digest and assimilate in the human body.

Goat’s milk is a great option for people who want to lose weight. It has less fat, but still maintains the high levels of proteins and essential amino acids found in cow’s milk.

Many people worry that they need to drink cow’s milk for calcium intake and the prevention of bone loss. Goat’s milk also offers high amounts of calcium, the amino acid tryptophan, and much less side effects of drinking cow’s milk. It’s just one of the many foods high in calcium.

While drinking cow’s milk is a common reason for allergies and excess mucous, goat’s milk is not. Cow’s milk is high in fat, which may increase mucous build-up. Moreover, the fat globules in goat’s milk are one ninth the size of those found in cow’s milk, another possible reason why it does not produce irritation in the gut.

In Naturopathic medicine, goat’s are referred to as bioorganic sodium animals. They are also associated with vigour, flexibility and vitality. Cows are calcium animals known for stability and heaviness. Bioorganic sodium is an important element in keeping joints mobile and limber. Goat milk has traditionally been used in medicinal cultures to nourish and regenerate an over-taxed nervous system. Goat’s milk is also extremely nutrient dense. It has almost 35% of your daily needs for calcium in one cup. Extremely high in riboflavin, just one cup of goat’s milk offers 20.0% of our daily needs. Add to that high amounts of phosphorous, Vitamin B12, protein and potassium. In fact, Ghandi himself rejuvenated his own health after extremely long periods of fasting through drinking raw goat’s milk.

Whereas most cow’s milk is pumped full of bovine growth hormones as well as a substance known as bovine somatotropin, a hormone specific for increasing milk production in an unnatural way, goat’s are rarely treated with these substances. Because of its use on the fringes of big agriculture, goat’s milk is not only more nutritious for you, but also less toxic.

Goat’s milk has the trace mineral, selenium, a key essential mineral in keeping the immune system strong and functioning normally.

Why You Should Drink Goat Milk Over Cow’s Milk

These are just a few of the many health benefits of goat milk. Not only does it contain more nutrients your body craves, but it also has less additives than cow’s milk. Go with the healthier choice.

The compositional features of goat milk give rise to a number of potential benefits, when compared with cow milk:
Digestibility
Goat milk proteins are digested more completely than cow milk proteins. For example, trypsin, an enzyme present in the stomach, breaks down 96% of goat casein, compared with only 76-90% of cow casein. Similarly, nearly three times more beta-lactoglobulin in goat milk is digested by human digestive juices compared to cow milk.
One reason for this is the differences in the way caseins coagulate in the stomach to form a sponge-like curd. Goat milk formula behaves more like breast milk, forming a looser curd structure than standard cow milk formulas. When in the baby’s stomach, this softer type of curd allows digestive enzymes easier access to the milk proteins, assisting with digestion.
As shown by a study in children with digestive disorders due to gluten intolerance, goat milk fat, with a higher proportion of medium chain fatty acids, is absorbed more efficiently than cow milk.
Micronutrient uptake
A number of studies have shown that micronutrients in goat milk can be absorbed more efficiently than cow milk, especially during anaemia or when the absorption capacity of the intestine is compromised. These studies point to a greater bioavailability of minerals from goat compared to cow milk, rather than the quantity of minerals in the milks.
Intestinal health
Development and maintenance of the protective barrier function in the intestine is important in health. An animal study showed that goat milk prevented the loss of intestinal barrier function following heat stress, indicating the presence of factors that help to maintain intestinal health.
Reduced allergenic burden Goat milk is widely used by people with digestive problems and sensitivities to cow milk. While goat milk cannot be considered hypoallergenic, it does have a different allergenic burden compared to cow milk. On average, five times more goat milk than cow milk is required to trigger an adverse reaction in children allergic to cow milk.
The key attributes contributing to the reduced allergenic burden of goat formula are:
Less allergenic proteins in goat milk. Animal studies show less severe reactions at the low levels of alphas1-casein in goat milk. Use of whole milk when making formula, keeps another allergenic protein, beta-lactoglobulin, at low levels.
More efficient digestion of goat milk proteins. Allergenic proteins are commonly resistant to digestion.
The development and maintenance of the protective barrier function in the intestinal epithelium that reduces the exposure of the immune system to allergens in food.
Based on scientific evidence and experience of use, the effectiveness of goat milk to alleviate allergy-related sensitivities to cow milk depends on the type of reactions. Symptoms of dermatitis were reduced in 59 of 67 infants aged 1-9 months and 33 of 41 children aged 12-36 months when treatment was combined with introduction of goat milk formula. Goat milk can sometimes help to reduce digestive symptoms or colic.  These symptoms all result from delayed or slow-onset allergy reactions to cow milk.
In contrast, goat milk is less able to relieve severe reactions such as redness and swelling of the face that may occur immediately following contact with a small amount of cow milk. Individuals who are highly sensitive to cow milk proteins are therefore advised to consult their allergy specialist prior to consuming goat milk. 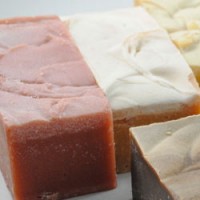